Hypochlorous acid (HOCl) is a weak acid formed via electrolysis that's scientifically-proven as a powerful oxidant, effective against invading bacteria, fungi, and viruses. There are over 300 published research articles on hypochlorous acid in general,

However, some of the key points mentioned are:

• Hypochlorous acid (HOCL) is entirely organic and harmless if ingested
• It is a water-based disinfectant that does not dry out the skin
• Scientifically proven effect against bacteria, viruses and fungi
• Is a ready to use, fragrance free and almost odourless disinfectant.
• It contains no alcohol and unlike alcohol-based disinfectants, it is gentle on the skin and avoids irritating or drying out the skin when frequently used.
• Based on a scientifically proven formula, used by hospitals in Japan, Russia, S Korea and many other countries. Offers longer-lasting protection compared to alcohol based disinfectants.
• Effective wound healing properties.
• Can be used as hand or surface sanitiser.
• Not fire hazardous, resulting in safer, cheaper and less time consuming handling.
• Environmentally friendly. 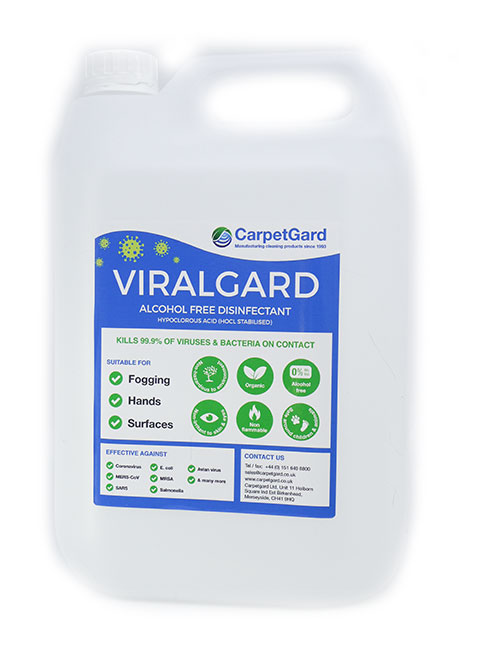 Product shown in a 5L container.